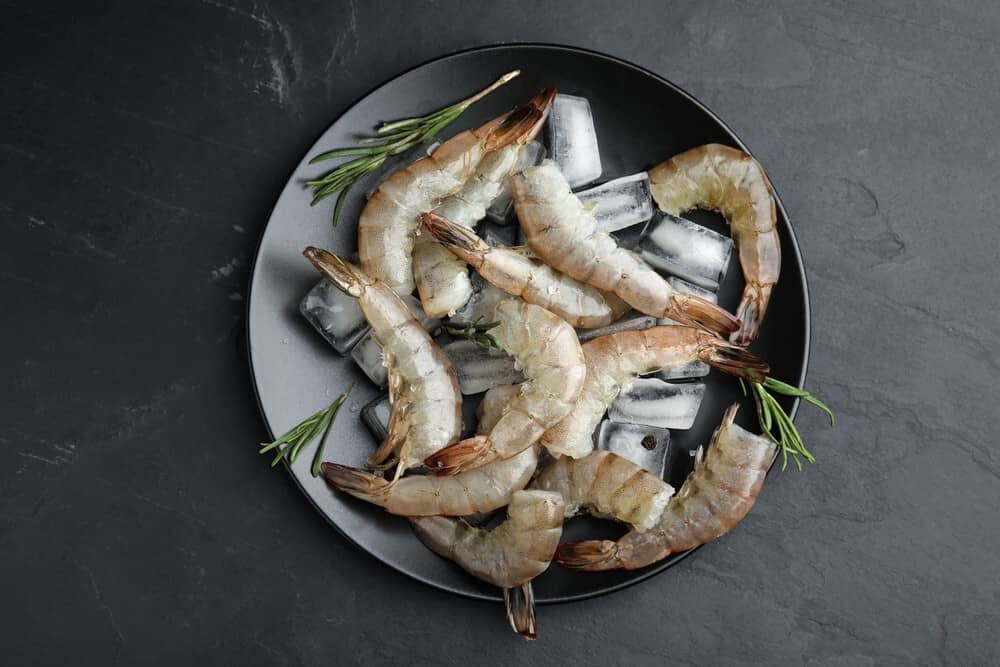 Shrimp is one of the most common seafood that is used around the world. It’s not only delicious but also full of health benefits. There are many types of shrimp that are different in size, color, and shape.

It’s advisable to include shrimp in your diet, but I mean here the cooked shrimp not the raw. In some cultures, raw shrimp is considered a delicacy although it is not recommended to eat due to the high risk of infection and poisoning.

So, we will know throughout this article why eating raw shrimp is not healthy. And if pregnant women can eat it.

Shrimp is rich in healthy omega-3 fatty acids that are essential for supporting heart health and help reduce bad cholesterol and raise good cholesterol levels, which reduces the risk of heart disease and strokes. In addition, the anti-inflammatory properties in shrimp promote heart health.[1]Effects of shrimp consumption on plasma lipoproteins

Shrimp is a good source of vitamin B12 which helps prevent memory loss and boost mood. Also, omega-3 fatty acids that are in shrimp enhance brain function. Furthermore, it contains tryptophan, which plays an important role in boosting mood.[2]Vitamin B12 Supplementation in Treating Major Depressive Disorder: A Randomized Controlled Trial – PMC (nih.gov)

Shrimp contains Astaxanthin which is an important antioxidant that helps reduce the damage that happens by sunlight. It also helps improve skin elasticity and reduce wrinkles. [3]Astaxanthin for the Food Industry – PMC (nih.gov)

As we mentioned above, shrimp contains Astaxanthin, the antioxidant that has an important role in improving eye health.[5]Astaxanthin – an overview | ScienceDirect Topics

Shrimp is low in calories and high in protein which supports feelings of fullness. Additionally, shrimp is rich in zinc, vitamin D, and iodine, which help increase leptin levels that suppress appetite and reduce calorie intake which leads to weight loss.

Is it healthy to eat raw shrimp?

Eating raw shrimp is considered unsafe because of the potential risk of infection. It’s not advisable to eat raw shrimp. You should cook it well to avoid poisoning and getting sick.

Additionally, raw shrimp may contain viruses and parasites that also cause illness and poisoning. [7]Parasites (Isopoda: Epicaridea and Nematoda) from ghost and mud shrimp (Decapoda: Axiidea and Gebiidea) with descriptions of a new genus and a new species of bopyrid isopod and clarification of … Continue reading

This kind of bacteria found in sea creatures can cause illness if you eat raw seafood. So, eating raw shrimp may cause infection, which causes dangerous problems including diarrhea, fever, vomiting, cramps, chills, low blood pressure, pain, swelling, and more symptoms.[8]Occurrence and Diversity of Clinically Important Vibrio Species in the Aquatic Environment of Georgia – PMC (nih.gov)

Raw shrimp may be contaminated with cholera, which is a harmful bacteria that cause illness.[9]Epidemiology of Seafood-Associated Infections in the United States – PMC (nih.gov)

Raw shrimp may contain parasites, which are harmful and cause health problems.[10]Microbiological and Parasitic Exposure and Health Effects – Seafood Safety – NCBI Bookshelf (nih.gov)

Can I eat raw shrimp in sushi?

Sushi is a popular food around the world that many people like eating. Raw shrimp is widely used in sushi. Restaurants that introduce sushi know that they have to buy the highest-grade quality and the freshest shrimp to use due to the high risk of infection that may be caused by raw shrimp.

Also, if you want to eat raw shrimp in sushi, you should choose the best types and in case you want to buy frozen shrimp, always check the expiry date. Amaebi is a famous type of shrimp that is used in sushi. It’s not allowed for pregnant women to eat raw or uncooked seafood. It’s not safe and can cause dangerous problems during pregnancy and expose your baby to many health problems. [11]A review of guidance on fish consumption in pregnancy: Is it fit for purpose? – PMC (nih.gov)

The harmful bacteria, viruses, and parasites that are found in raw shrimp cause illness and infections which negatively affect a baby’s health and may lead to many serious health problems like poisoning and in some cases miscarriage.

Including healthy foods in your diet has a positive effect on your health. Shrimp is considered one of the best foods that provide your body with healthy nutrients that help support overall health.

But, you should cook it well before eating and avoid raw shrimp to enjoy eating it safely.

Can Diabetics Eat Shrimp? Benefits and Side Effects