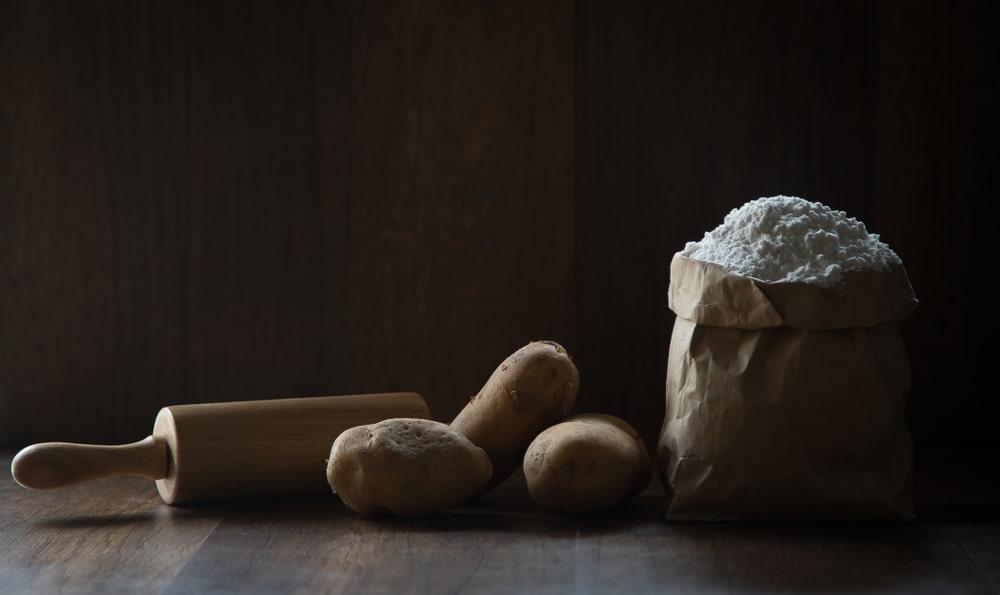 The potato originated in South America, and it is currently a popular and nutritious staple around the world. Throughout the year, it is cheap and readily available, and it is also easily prepared in many different ways. Also, it’s the key ingredient in the so-called potato diet.

To make potato flour, you need to dry and crush potatoes, which is a time-consuming but relatively simple task. This minimal processing ensures that potato flour carries most of the nutritional content of whole potatoes.

Because potatoes are naturally gluten-free, potato flour is a common ingredient in gluten-free diets.

If your recipe requires potato flour but you don’t have any at the moment, you can use one of the alternatives in this article. The best substitute depends on the recipe and what effect potato flour has on it. In general, we find that potato flakes and mashed potatoes are very close alternatives.

Keep in mind that not all alternatives can be swapped 1-1, so some experimenting on your part may be required.

What Is Potato Flour?

A type of flour made from whole potatoes. The actual process it takes to make it may vary, but it usually involves light cooking, drying, and crushing the potatoes into a fine powder. The potatoes are most often peeled, but some brands keep the peel to preserve the nutritional value.

For more information about potato flour, its uses, and nutritional value.

Why To Substitute for Potato Flour?

Potato flour is gluten-free, nutritious, and versatile, so why substitute it? For starters, it may be hard to find in your local food store or supermarket, depending on where you are. It can also be relatively expensive, and not everyone is willing or able to make their own version at home.

Additionally, potato flour can give a gooey or chewy texture that you may not like, depending on the recipe and the amount used. There are other, more forgiving substitutes that can give your recipe a slightly creamy texture.

Potato flour is not usually used as the main flour in baked recipes because of this texture problem, which is why you may need to mix it with other flours or replace it altogether.

People often ask if potato starch and potato flour are the same, and the answer is: they’re not. Potato flour is made in a simple process that can be easily replicated at home, leaving most of its nutritional value intact. It has a subtle, earthy flavor and a beige/yellowish color.

On the other hand, potato starch requires special equipment to be extracted from potatoes, so it can’t be easily made at home. It is pure starch that has no extra nutritional value and almost no flavor. It is usually sold as a white powder.

For a more thorough comparison of potato flour and potato starch.

If you run out of potato flour and you don’t have time to make your own, don’t fret! Make use of one of the following substitutes to complete your recipe.

All of these ingredients can be used as a general substitute for potato flour, but some are better for more particular uses. Please keep in mind that the substitution rate below is merely a suggestion, because it can vary according to the recipe, so some experimentation may be required.

One of our favorite potato flour substitutes. Potato flakes are made from dehydrated potato chunks, they’re a quick and easy alternative to potato flour, and they’re just as versatile. They’re basically the same ingredient, but they aren’t finely-grounded enough to be considered flour. 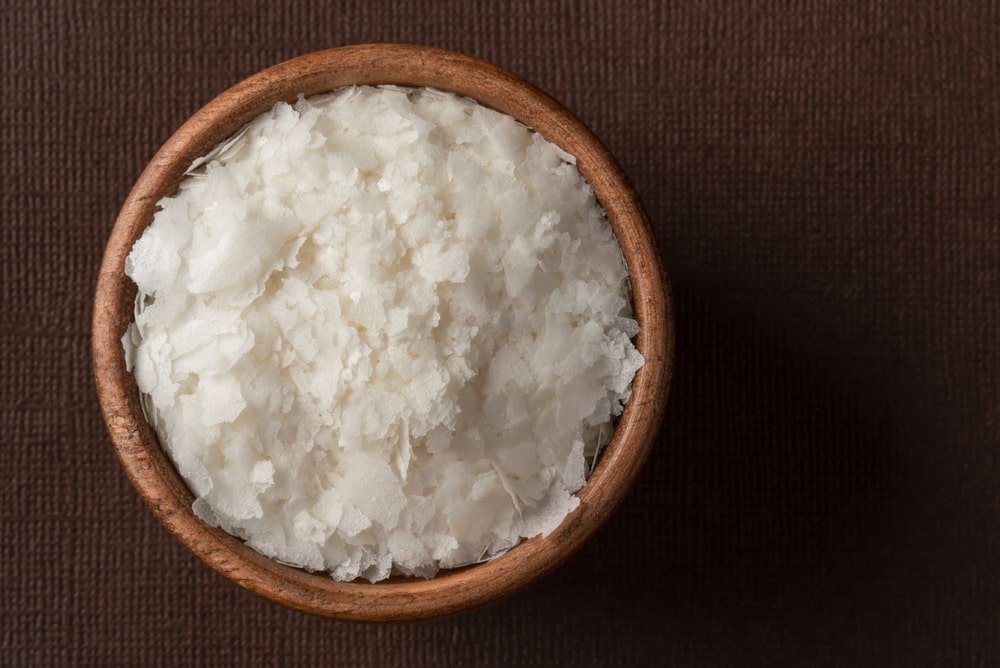 Potato flakes have a similar earthy flavor and give the same thickening, moist quality to your recipes, so they can be used to give that creamy texture to broths, soups, sauces, and many desserts. It is also great for frying.

If you weigh them, potato flakes can replace potato flour with a 1-1 ratio.

The only downside is that store-bought potato flakes may have many additives to extend their shelf life. If you decide to go with potato flakes, make sure to check the ingredients on the label. Ideally, you only want to have one ingredient which is dried potatoes. If that’s not an option, the fewer ingredients the better.

If you’re using them as breading for frying, the flakes may be too large for your liking. You can put the flakes in a blender or food processor to create a finer powder or pick another substitute from the list with smaller particles.

Pure starch extracted from potatoes. It’s not as nutritious as potato flour, but it’s a great thickening agent and is very easy to use. 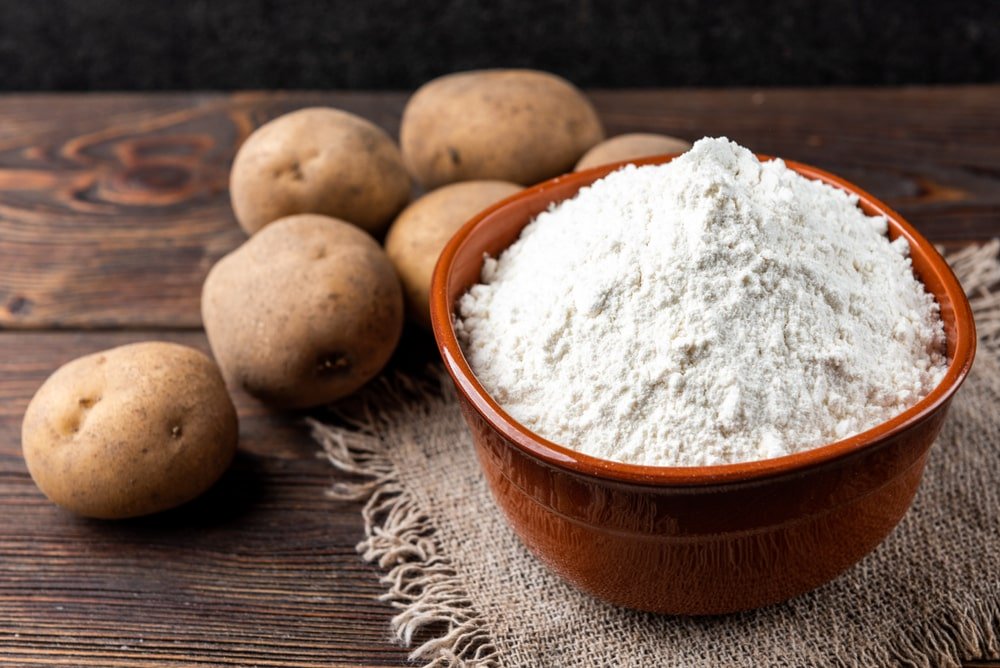 Potato flour is actually about 80% potato starch, so you can substitute them equally. However, keep in mind that potato starch is relatively tasteless, so you may need to add extra spices to compensate for it.

A gluten-free flour substitute extracted from corn. It has a similar thickening quality to potato flour and can be substituted 1-1. It’s rather bland and doesn’t have much taste. 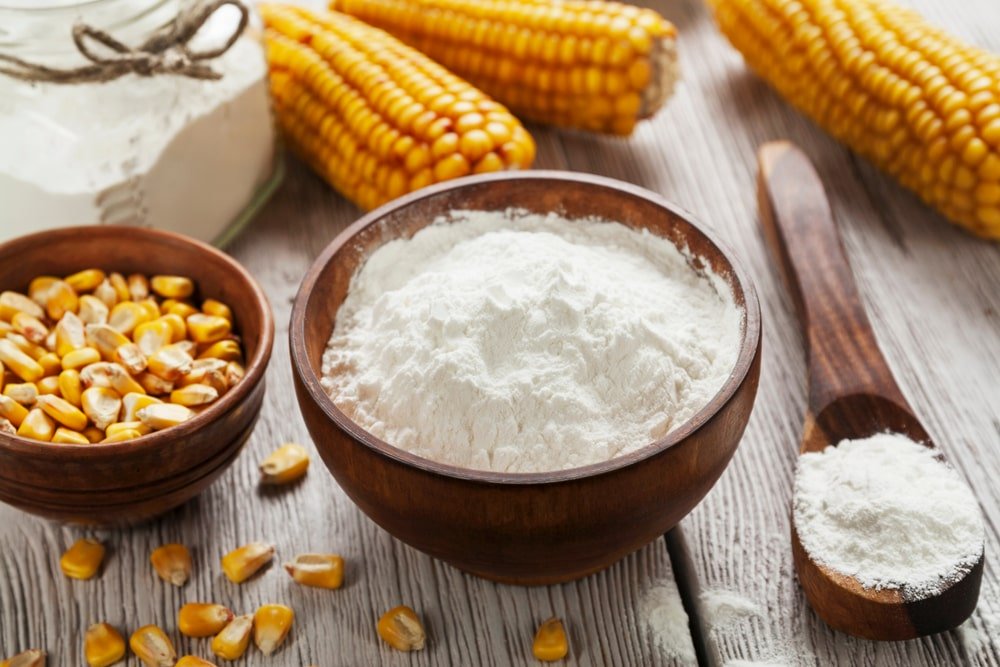 Corn starch is a near-perfect substitute for potato flour in most cases, it is also particularly good for frying. Foods fried with a cornstarch coating preserve the moisture on the inside while leaving that perfect crunchy golden layer on the outside.

Another gluten-free flour alternative. It’s a great binding agent and gives a creamy texture, it also won’t change the color or taste of your final product. It mixes well into sauces, soups, and so on, giving them a thickened texture without leaving any other trace. 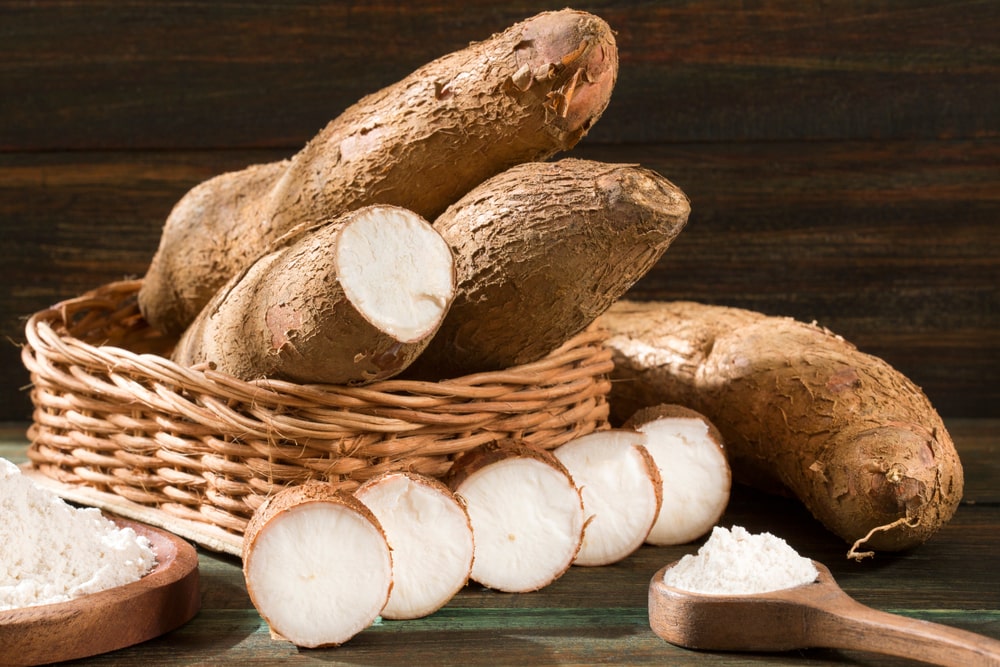 For baking, substitute with a 1-1 ratio for a lighter, fluffier bread with subtle sweet undertones. For sauces and soups, you can add 1.5 to 2 teaspoons of tapioca flour for every 1 teaspoon of potato flour, and you’ll get a creamier texture with no noticeable change in taste.

One of the most nutritious and accessible alternatives on this list. If you’re making potato bread, you can simply use mashed potatoes instead of potato flour, and you’ll get the same potato flavor and wonderful texture. 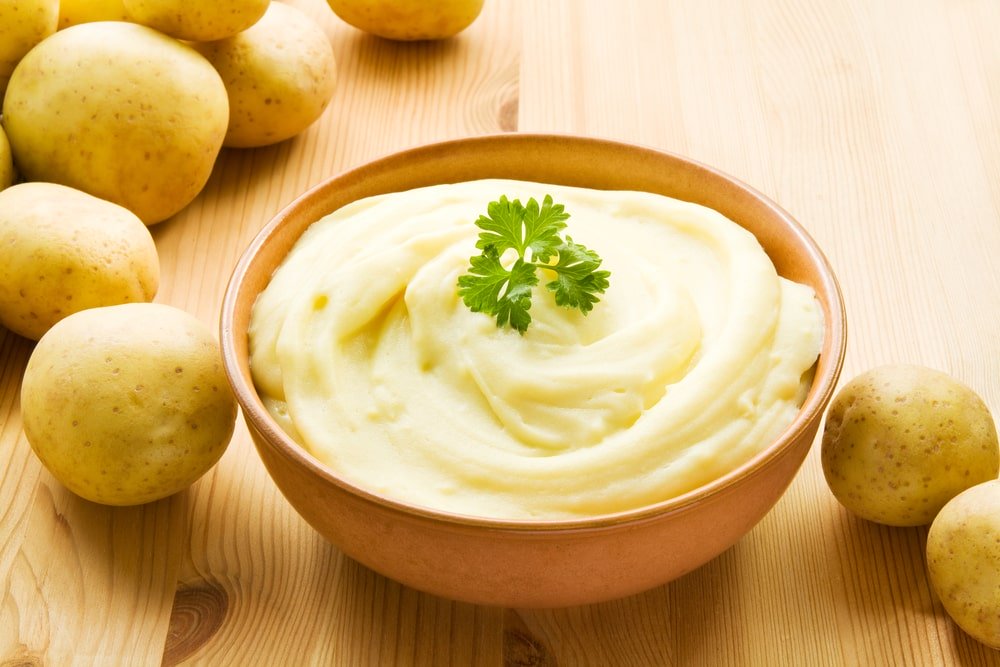 Because mashed potatoes contain a lot of moisture, you’ll have to add a bit more than you would if you were using potato flour (which is much more concentrated).

You can also use it to thicken moist recipes, such as soups and sauces. If you need it for a drier recipe, make sure not to add too much or you may end up with a gooey consistency.

One of the least-known alternatives on the list. Xanthan gum is a very strong thickener, so you only need ½ a tablespoon of it for every 1 tablespoon of potato flour. 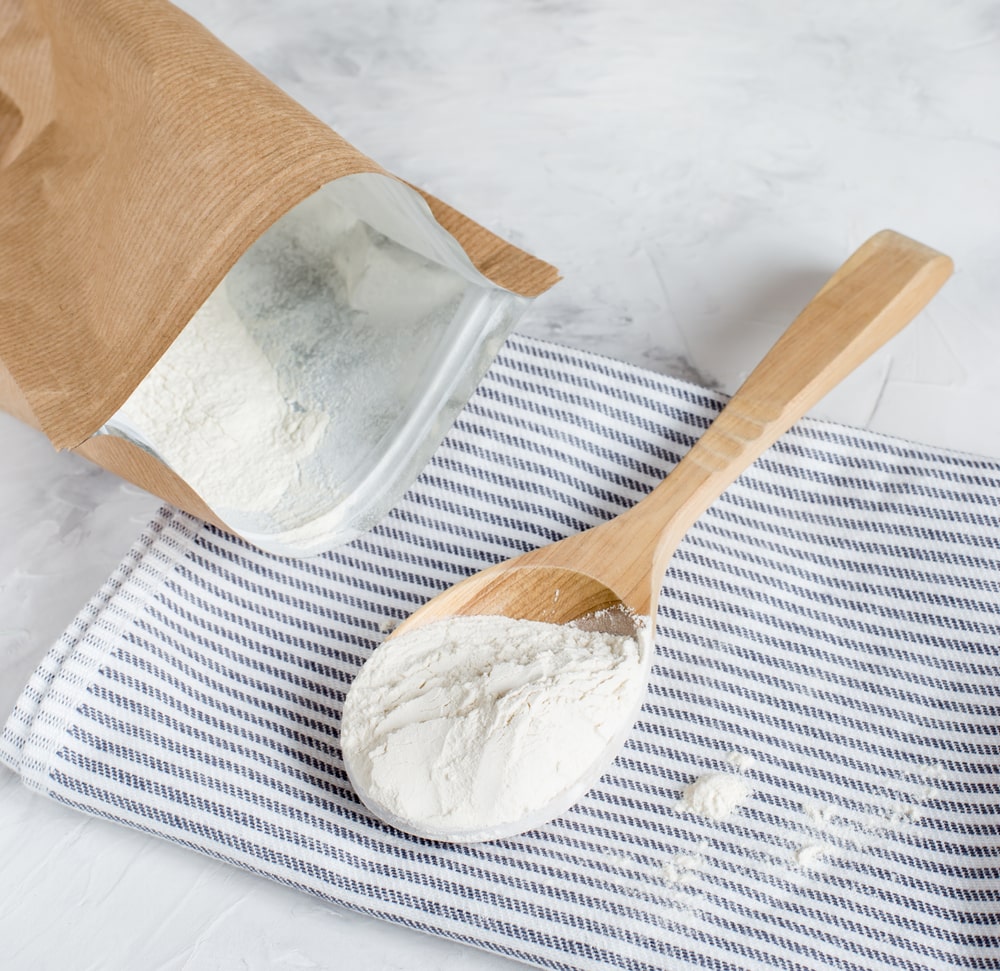 Xanthan gum is created when sugar is fermented by bacteria, creating a gooey substance that is made solid by adding alcohol. Next, the substance is dried and crushed to create a powder. The resulting flour is a soluble fiber, which cannot be digested.

Xanthan gum is actually a common additive in processed foods, but it’s not often found in home recipes. It was discovered in the 1950s.

It is derived from a plant called Maranta arundinacea and is one of the most popular potato flour alternatives. You can use roughly the same amount of arrowroot flour as you would potato flour, and you will end up with the same consistency.

Arrowroot flour is a gluten-free flour that is tasteless and will give your recipe a thickened texture and a distinct glossy finish. 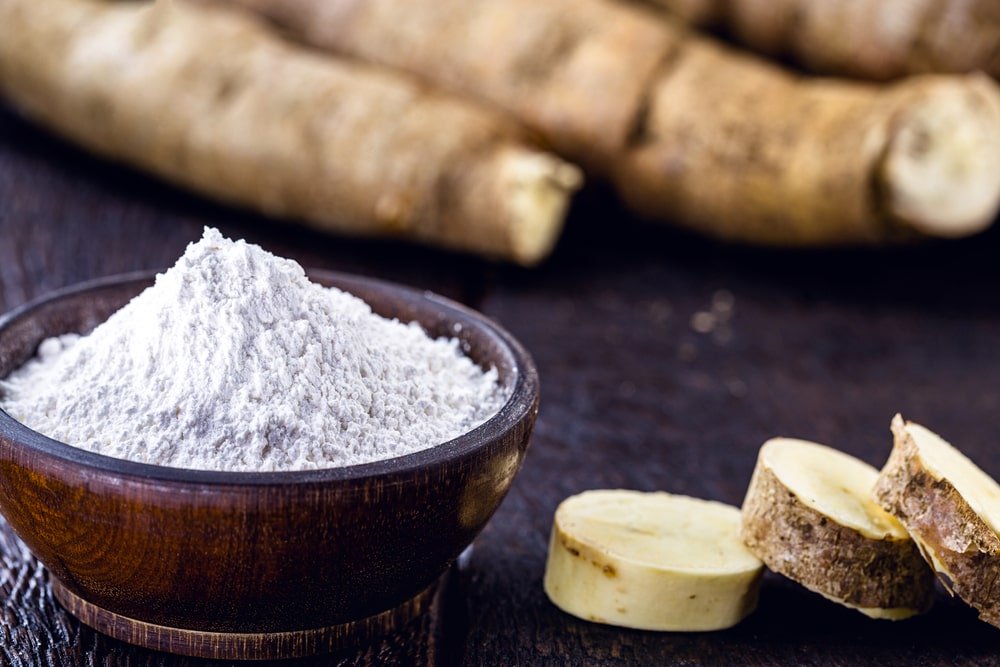 It has the added benefit of preserving frozen meals by preventing ice crystals from forming. If you make burger patties and freeze them for example, adding arrowroot flour will give them a thicker consistency and will ensure that they remain fresher when they thaw.

Even if you have potato flour on hand. If you plan on freezing your recipe, we recommend adding arrowroot flour to it just in case. Adding arrowroot powder to frozen desserts is also a great idea.

A gluten-free flour with a harder consistency, so it doesn’t absorb liquid as well as the other options. This makes it ideal for cookies, rice noodles, and anything with a crispier texture. It also creates airy baked goods with a subtly sweet flavor, which is ideal for cakes and muffins. 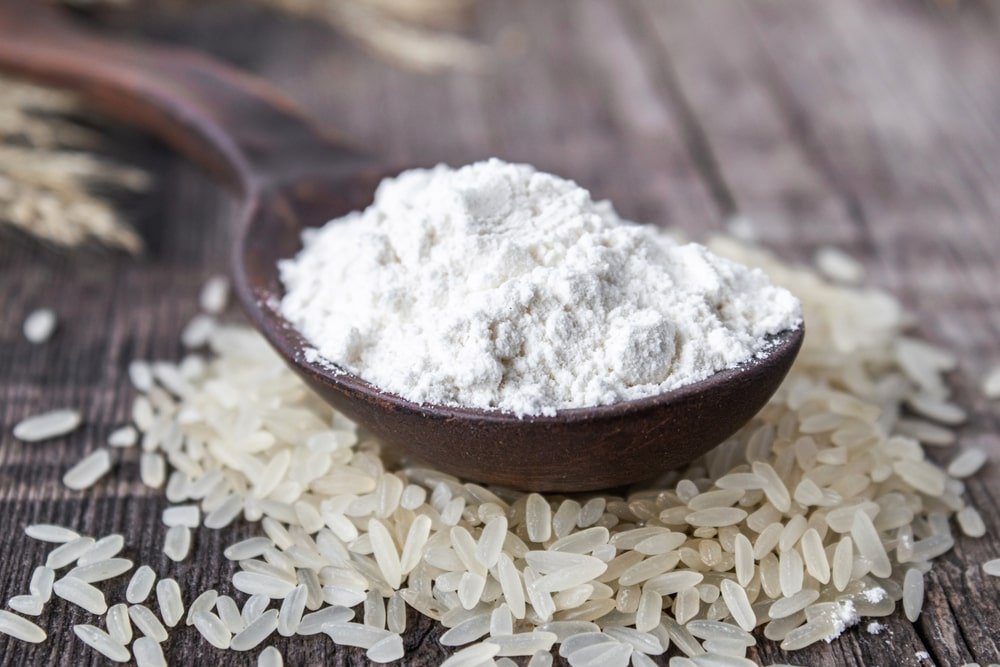 There are several types of rice flour. Brown rice flour is frequently thought of as the healthiest variety, thanks to its high fiber, B vitamins, and manganese content. It is also less likely to cause blood sugar spikes.

You can try mixing rice flour with some of the other moisture-absorbent substitutes until you reach the texture you want. For example, mixing 50% potato starch with 50% rice flour creates a very good alternative to potato flour.

Unlike most of the alternatives on this list, almond flour is low-carb and nutrient-dense. Like rice flour, it is good for baking anything with a crisper texture, such as baguettes, macaroons, pie crusts, cookies, etc. 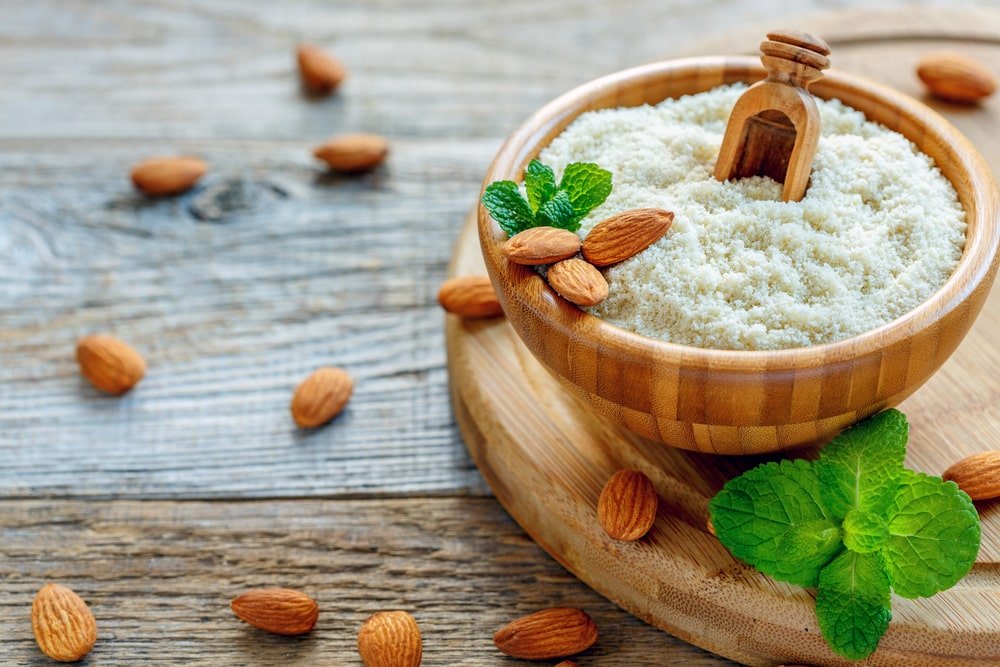 Almond flour is made from almond nuts that were pressed to extract the oil out of them. It has a sweet, buttery flavor and a creamy color. It is a staple in many French desserts.

Almond flour is one of the healthiest flour options out there. It is an excellent source of vitamin E and manganese, among other nutrients.

If you’re using almond flour in your recipe and serving it to someone, make sure they are not allergic to almonds.

A highly nutritious gluten-free flour alternative. It doesn’t retain as much moisture as potato flour, but you can still expect a dense texture. 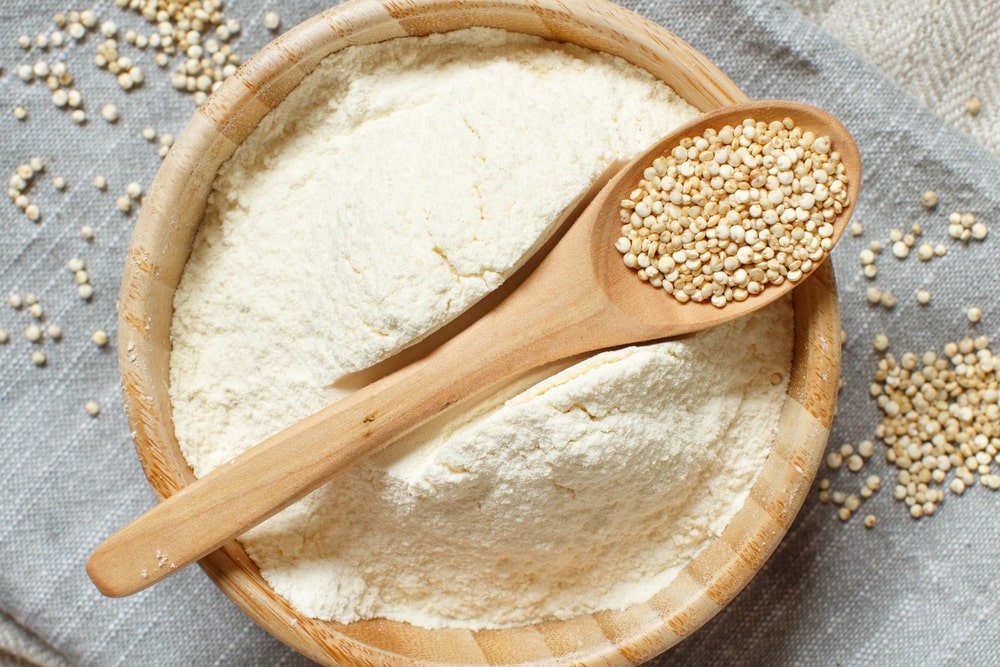 Quinoa flour is particularly useful for baking. Quinoa in general has high protein content and significant amounts of all 9 essential amino acids, which makes it great for anyone on a vegan or vegetarian diet.

Quinoa is a great source of fiber, B vitamins, vitamin E, and many minerals such as iron, phosphorus, and manganese.

The only problem with quinoa flour is its taste, which has been described as bitter, earthy, and even grassy. It’s a strong, unusual taste that isn’t palatable for many people, which is why you should try to mix it with other, better-tasting flours.