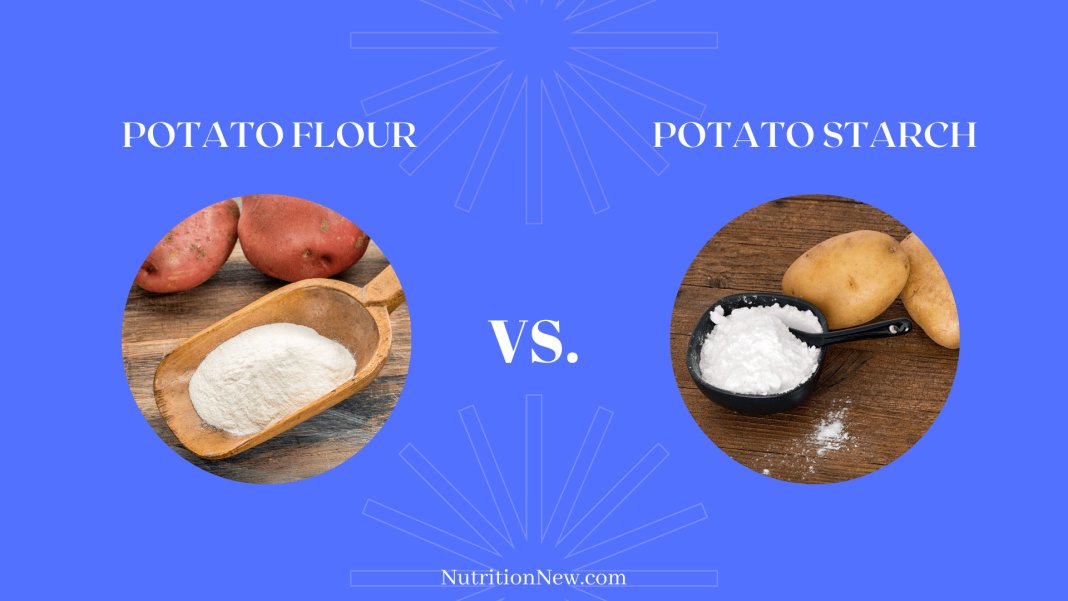 Potato starch and potato flour are two products that are extracted from potatoes. They can have very similar uses, which is why people confuse them a lot. Below, we’ll talk about the most important similarities and differences between potato starch and potato flour so you can make an informed decision. We’ll discuss various aspects such as how each ingredient is produced, its nutritional content, and its recommended uses.

Keep in mind that some brands may mislabel their products. For example, if you see a product labeled “potato starch flour”, it is usually just potato starch.

Table Of Contents hide
1 Production Methods
2 Nutritional Content
3 Appearance
4 Flavor
5 Best Uses
6 Can They Be Included in the Potato Diet?
7 Conclusion: Which One Should I Choose?

Potato starch manufacturing involves raw peeled potatoes going through a lengthy refining process to extract the pure starch out of each cell. The resulting starch is then collected, cleaned, and dried until it has the right consistency. It requires special equipment that can only be found in a factory environment. 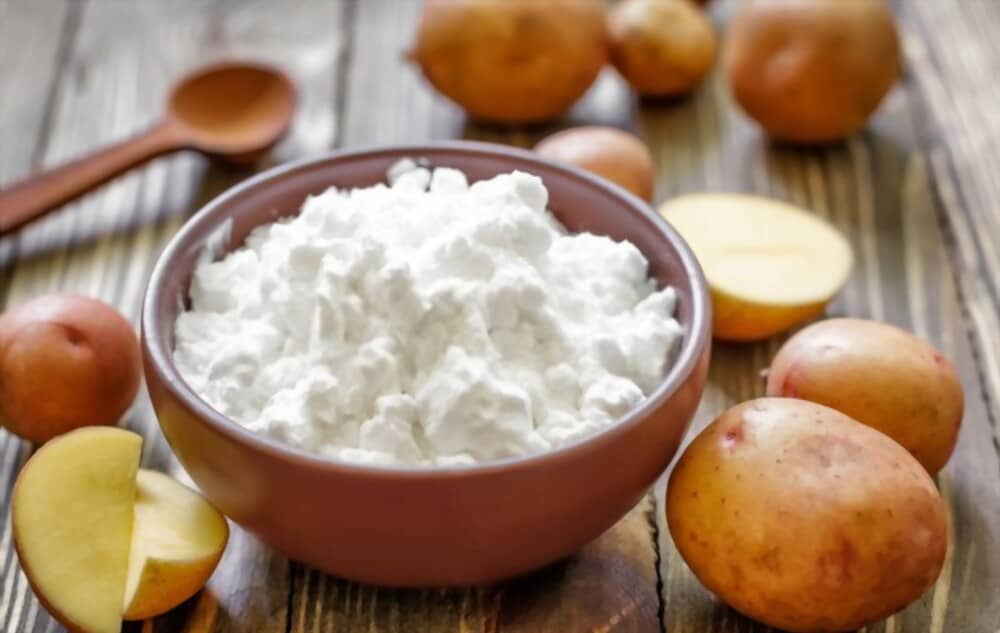 Potato flour is just whole potatoes that went through some light processing (sometimes including the peel). The potatoes can be either raw or lightly cooked, then they are cut into little pieces and dried. The resulting dehydrated potatoes are crushed into a fine powder. This process is a bit time-consuming, but it’s relatively easy to replicate at home. Potatoes are gluten-free, which is why both potato starch and potato flour are also gluten-free. Potato is about 20% dry matter of which 60 – 80 % is starch.

Potato starch is pure starch that just happens to be extracted from potatoes, so it has a high soluble fiber content. The complex production method means that the starch is stripped of the majority of the natural nutritional value of potatoes.

Despite the low nutritional value, the resistant starch and fiber found within it make it good for digestion, since it is used as fuel for good gut bacteria, essentially acting as a probiotic.

Potato flour goes through a relatively simple production process, which is why it maintains much of the nutrition of whole potatoes. This includes some B vitamins, vitamin C, and many minerals such as iron, phosphorus, magnesium, and potassium. It also has smaller amounts of protein, zinc, calcium, and copper, as well as some antioxidants.

Potato flour is a bit heavier with larger grains and has a pale-yellow color similar to the inside of a potato.

Potato starch is pretty much tasteless.

Potato flour has an earthy, subtle flavor that is reminiscent of potatoes.

Both potato flour and potato starch are produced through a drying process, so they are very moisture-absorbent. This makes them suitable for providing a thicker, creamier texture to many recipes, including sauces, creams, broths, pie fillings, and the like. Adding them to the dough while making baked goods will give your recipe an airy. You can use either product as a coating for your favorite fried recipes, to make them crunchy on the outside and soft on the inside.

Potato starch and potato flour can be used interchangeably in a lot of recipes and will extend the shelf life of anything you put them in. Below, we highlight where each product excels the most:

Potato starch is mainly used as a thickening agent. It leaves no flavor behind so it can be used in all kinds of recipes to give them a better consistency without changing their flavor or color.

When frying, it gives that crisp, golden coat while trapping all the moisture on the inside. It’s a great substitute for cornstarch.

Potato flour’s subtle flavor and thick texture make it ideal when baking. It can be included in potato bread, yeast bread, or any number of baked recipes and desserts, and it will give them a mouth-watering texture and a more grounded taste.

Potato flour is not often used as the only flour in baked goods, because it can make the dough too chewy, which is why you may need to combine it with other types of flour. However, the resulting improvement in texture and taste is worth the extra effort.

Can They Be Included in the Potato Diet?

Since potato flour has a close nutritional value to whole potatoes, and potato starch is just the starch extracted from potatoes, there’s no strong objection to including these ingredients if you wish.

However, the potato diet often consists of fairly simple recipes, so you may not need them at all. The idea behind the potato diet is to make food as “boring” as possible, and most meals consist of plain boiled or baked potatoes. Of course, if this doesn’t sound appealing to you, you can adjust the diet however you see fit or find a diet with more variety.

Conclusion: Which One Should I Choose?

If you only need a thickening agent and don’t want to worry about changes in taste and color, then go with potato starch.

If you’re more concerned about the nutritional content, or you like to add that rich earthy flavor in a lot of your recipes, then you’ll find potato flour to be more a useful option.

Overall, they’re both useful ingredients to have in your kitchen, and they can be substituted for each other. They’re especially useful to have if you’re on a gluten-free diet.