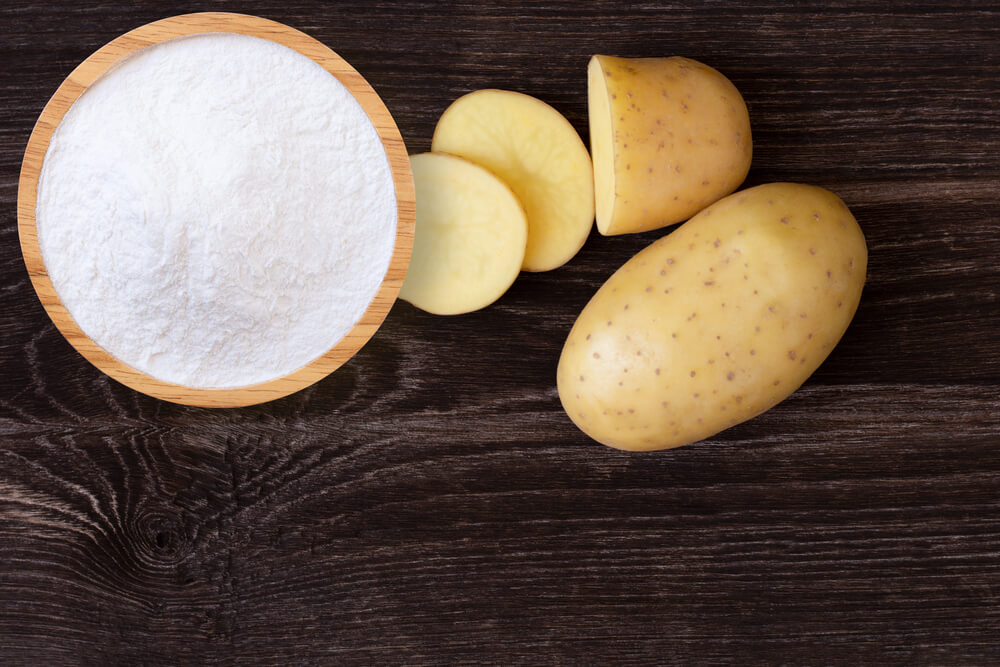 Potato flour is a versatile and healthy alternative to wheat flour. It’s a great thickener that adds a creamy texture to broths, creams, sauces, and frozen desserts, and can be used for breading fried foods to create a crunchy golden crust. When used for baking, it gives a fluffier, lighter texture for bread, cake, cookies, and even pizza.

It goes through minimal processing, so it can be easily made at home. It has most of the nutritional value of whole potatoes, and even some of its earthy flavor.

Potato flour holds in moisture, extending the shelf life of whatever you use it for. It is especially good for keeping bread moist and fresh for longer. You can add it to meatloaves and burger patties for a similar effect.

Table Of Contents hide
1 Why? The nutritional pros
2 Best Uses of Potato Flour
3 Is it ok with the potato diet?
4 Is potato flour gluten-free?
5 How to make it?
6 Where to buy it?
7 Organic potato flour?!
8 Why not? The cons
9 Potato flour bread
10 Substitutes

Why? The nutritional pros

Although potato flour is technically a processed food, it goes through very minimal processing; almost all the nutritional value of cooked potatoes remains intact. Like whole potatoes, it is a good source for:

Potato flour is a great plant-based source of iron, not only because of its relatively high iron content but because it contains vitamin C which improves its absorption.

Potato flour is made from a drying process, which is why it absorbs moisture into any recipe you include it in, creating a thickening effect that can be used for many recipes. This moisture-absorbent quality helps keep your baked goods fresher for longer.

Potato flour is not often used as the only flour when baking. Instead, it is combined with other, less absorbent flours to create a more manageable consistency.

When used for baking, it gives a lighter, fluffier texture and softens the dough. It can be included in bread, cakes, muffins, cookies, and any baked desserts with a soft center. You can even add it to pizza dough or burger patties for better consistency.

Potato flour is a great gluten-free breading for all your favorite fried recipes, it is also much more nutritious than normal breading. With it, you can indulge your fried food cravings with less guilt.

Is it ok with the potato diet?

Potato flour has a very similar nutritional value to whole potatoes, so there’s no problem with including it in the potato diet. However, you may not find a lot of uses for it since the diet often uses fairly simple recipes. 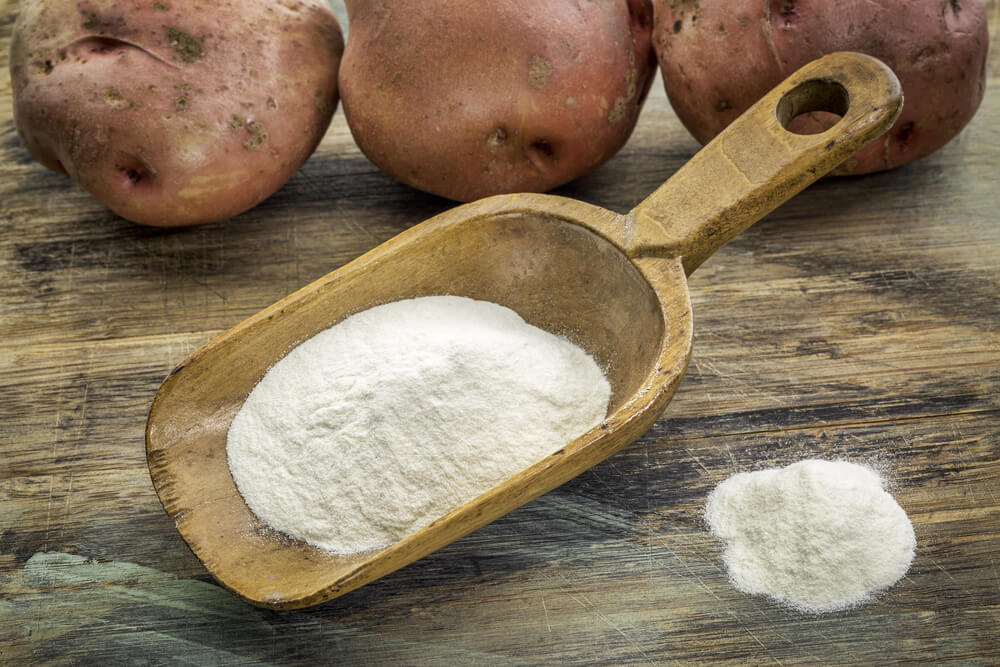 Yes! Potato flour is a great ingredient to have for anyone with gluten sensitivity because it is naturally 100% gluten-free. It’s a safer and more nutritious alternative to wheat flour, which is needed for a lot of recipes. Potato flour should be a staple ingredient in your gluten-free pantry.

How to make it?

Potato flour is easy to make with common tools found at home, and there are several ways to do it, but you’ll generally follow these steps:

Alternatively, you can make potato flour from mashed potatoes or grated potatoes, and dry them in the same way.

Where to buy it?

Potato flour is often found in large supermarkets, usually in the baking aisle but not necessarily. You can also find it in more specialized healthy food or gourmet food stores.

Why not? The cons

There aren’t many disadvantages to potato flour. As mentioned before, it is nutritious and gluten-free. One problem you may face is that it may not fit that well into all recipes that require flour. It has a distinct potato taste that you may not want in your recipes, it is also prone to creating a gooey, gelatinous texture.

Another disadvantage is that it can be a bit costly. It’s usually more economical to make your own potato flour, which some people may not have the time or willingness to do.

If you’re trying to bake something that should be dry and crisp, like a baguette, then potato flour would be a really bad idea. Almond flour or coconut flour may be a better alternative in this case.

Potato bread is unique because of its dense, yet airy texture. It is traditionally made from wheat and mashed potatoes, but you can use potato flour instead. 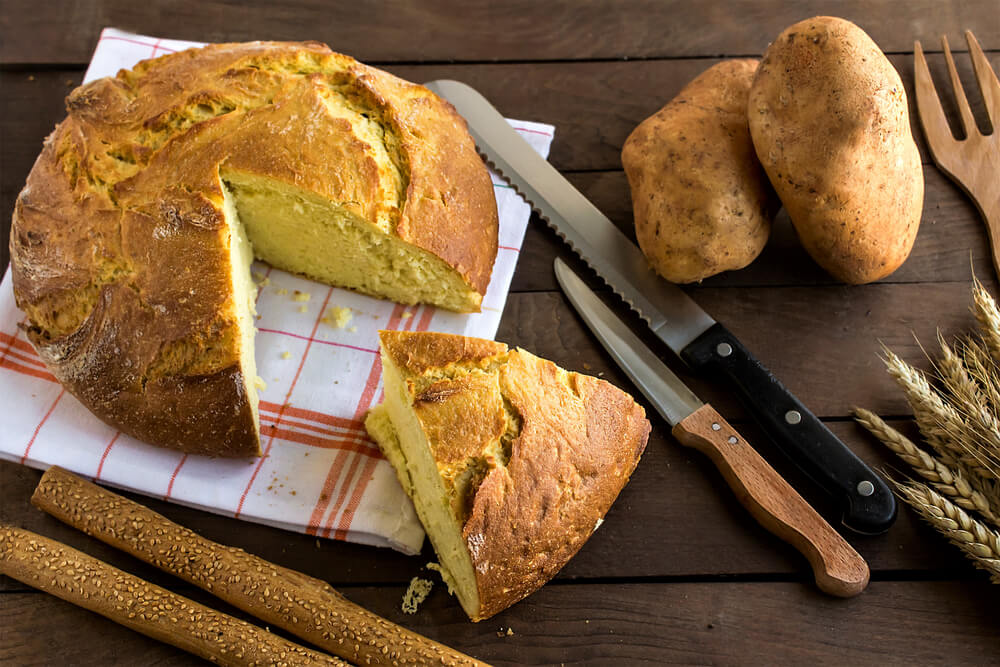 In case you don’t have enough potato flour on hand for that delicious recipe you’re making, there are many alternatives that you can use. You can go for potato starch, potato flakes, or mashed potatoes for a very similar effect, or you can try other substitutes. If you’re making something that requires a creamy texture, you can try cornstarch, tapioca flour, arrowroot flour, or quinoa flour.

If your recipe requires a harder consistency or a crisp texture, use alternatives that don’t absorb as much water, such as rice flour or almond flour.

Learn more about all the potato flour alternatives and their nutritional value.

Keep in mind that not all alternatives can be swapped 1-1, so some experimenting with measures may be required.

The 13 Best Nutritional Yeast Substitutes | Why and Benefits

Potato Starch And Potato Flour | Which One Should I Choose?

The 1200 Calorie Diet | Is It Effective For Long Practicing?

The 13 Best Nutritional Yeast Substitutes | Why and Benefits

The 800 Calorie Diet Plan | Between The Truth and Myth

Calorie Diets | All What You Need To Know About Them

ABOUT US
NutritionNew.com is your Nutrition, Fitness, Diet and weight loss website. We provide you with the latest breaking news and videos straight from the nutrition field.
Contact us: contact@nutritionnew.com
FOLLOW US
Copyright 2018 - NutritionNew.com
Go to mobile version